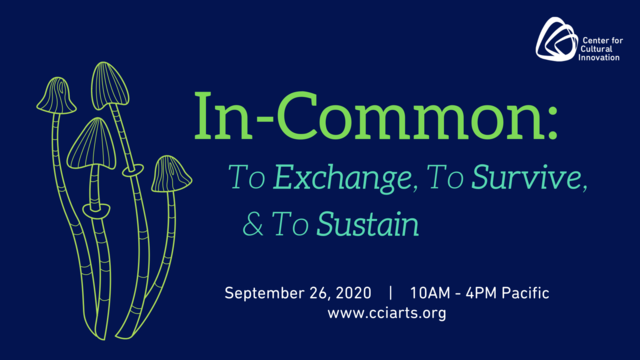 On September 26, 2020 CCI presented In-Common: To Exchange, To Survive, and To Sustain, a daylong convening that aimed at shining a spotlight on important efforts and projects that are exciting, promising alternatives to conventional systems and institutions that have done more to divide than unify people in the arts. Invited speakers centered real solutions for building ownership, strengthening local economies, reducing debt, and advocating for better systems that work for all.

"The actively future-minded and progressive speakers from each organization delivered genuinely hopeful ideas. Simply presenting the idea of alternative economies and the fact that people are doing the work, was inspiring. It gave me hope for the future and a starting point for looking at new models for economic survival." Convening Attendee

The current economic system has not supported the exchange of resources. Instead, our economy advocates for the exploitation of an ill-informed public, bestows accolades for personal risk/gain, and encourages unsustainable market behavior that leads to accumulating and hoarding of wealth. This has resulted in a vulnerable workforce and the rise of independent gig workers, and directly shapes the nature of our entrepreneurial culture. As a part of rethinking capitalist culture, and because systems change cannot happen overnight, it's time to advocate for a "redistribution" of access to knowledge and skills.

In-Common: To Exchange, To Survive, and To Sustain was generously supported by